Among the objectives of the Roundtable were to collate information on Middle Palaeolithic research conducted over the past few years and to stimulate the formation of diverse working groups interested in focusing their attention on specific or general issues. The Roundtable was held at the Church of S. Jacopo in Campo Corbolini on February 9-10, 2012.

ISO/IEC 17025:2005-accredited Beta Analytic would like to thank Mr. Guido Guarducci, one of the organizers, for his assistance in the company’s advertising efforts at the Roundtable.

The Center for Ancient Mediterranean and Near Eastern Studies aims to create a new approach in education and scientific research on the Mediterranean and Near Eastern ancient cultures through its collaboration with the Lorenzo de’ Medici Italian International Institute (LdM). CAMNES promotes its archaeological research program through events, seminars, conferences, exhibitions, and publication of archaeological results. CAMNES and LdM provides a variety of excavation projects in Italy, Albania, Greece, Cyprus, Egypt, Turkey, Syria, and Jordan, among others. 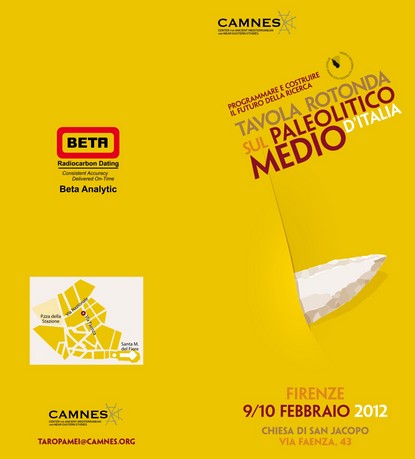