Beta Analytic is one of the sponsors of the Alaska Anthropological Association’s 38th Annual Meeting which started March 9, 2011. The four-day event is held at Westmark Hotel in Fairbanks, Alaska, and is hosted by the University of Alaska Fairbanks Department of Anthropology. 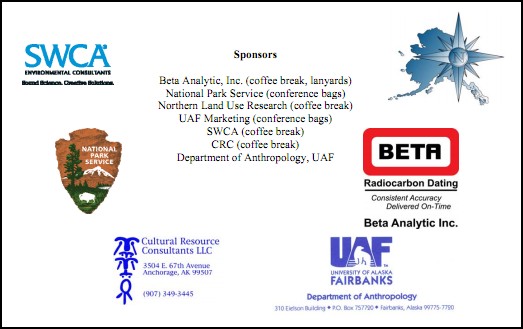 Below are some researches presented at the annual meeting that involved radiocarbon dating:

Four sites at Quartz Lake have preserved bone in a variety of temporal and spatial contexts. The poster is a brief view of discernable patterns of faunal resource uses at the sites with considerations of the effects of taphonomic agents on these patterns. Finer scale analyses are based on tests of basic soil chemistry, radiocarbon dating results, and examinations of cultural bone reduction processes. Broader scale analyses are based on observations regarding changes in isotopic signatures from lake cores, lake hydrography, and area geomorphology.

The Owl Ridge Site: Multiple Occupations of the Teklanika Valley at the Pleistocene-Holocene Boundary (Graf, Kelly and Angela Younie)

Owl Ridge was initially excavated by University of Alaska-Fairbanks archaeologists nearly 30 years ago. Its remoteness on the landscape made it difficult for full-scale excavations so that information recovered by these initial tests was fairly incomplete. In 2009 and 2010, the researchers revisited the site, opening nearly 60 m2, to reassess the stratigraphic contexts of cultural components, collect dating samples for AMS analyses, and increase the archaeological sample to include diagnostic artifacts and cultural features. At this year’s annual meeting, the researchers will present the results of their excavation, focusing on site formation and lithic analyses.

The Serpentine Hot Springs site (BEN-192), located on a bluff overlooking Serpentine Valley in the Bering Land Bridge National Preserve, was discovered in 2005 by NPS archaeologists. In 2009 and 2010, archaeologists from Texas A&M University revisited BEN-192 to conduct excavation and evaluate the site’s geological context, in the process discovering a fluted-point assemblage in a sealed stratigraphic layer associated with two hearth features. Both features included concentrations of burnt bone and charcoal; one has been dated to approximately 10,000 14C BP and more dates are forthcoming. This paper discusses site location, geomorphological context, and radiocarbon dating of the hearths.

The company wishes to thank conference organizers Dr. Ben Potter and Charu Uppal for their assistance.